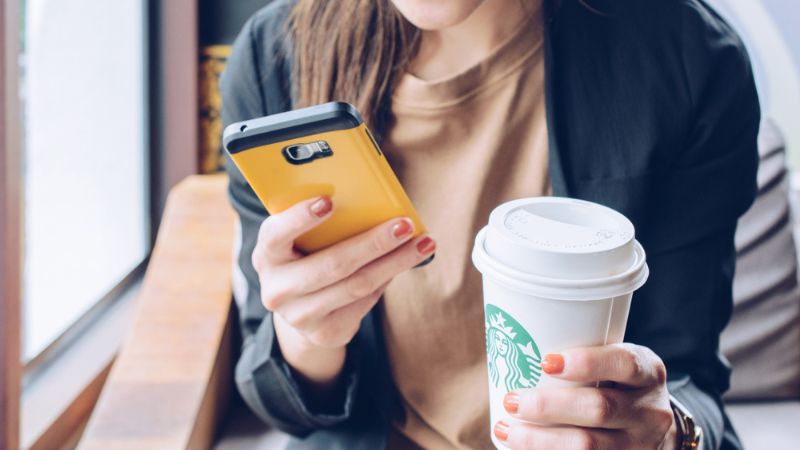 Remember when rewards programs were good?

When your wallet was filled to the brim with cards that would get a stamp or hole punch with every order. It may have been terrible for our backs and hips, as an ever fatter wallet all but ensured your next chiropractor appointment. But when you passed a fully stamped card over the counter and claimed your free Subway sub, life was good.

Unfortunately, Starbucks Odyssey is not that.

But let's start with the brief positives. Starbucks' (SBUX) target market is primarily those aged 25-40 so that matches the demographics of people who are “interested” in NFTs.

It doesn’t rely on a digital currency and its miners/stakers, so it isn’t exposing its reward members to financial volatility at the ground level - but there likely still is volatility exposure.

And the Web3 integration is being added on top of the company's massively successful reward program, which helps drive more than 50% of Starbucks' revenue through repeat business. So it expands, instead of replacing, something successful.

Operationally, it's just a waitlist at this time, and - with the vague wording and lack of a set launch date - it seems like something that is still getting fleshed out.

However, here is what we do know: Odyssey will give members “experiences and ownership that was not possible before” and it will “unlock digital, physical and experiential benefits that are uniquely Starbucks”.

I don’t want to call it a millennial-targeted scavenger hunt, but it seems that way as “members can engage in Starbucks Odyssey ‘journeys,’ a series of activities, such as playing interactive games or taking on fun challenges to deepen their knowledge of coffee and Starbucks. Members will be rewarded for completing journeys with a digital collectable (sic) ‘journey stamp’ (NFT).” (Yes, that typo is on Starbucks’ page. But they meant “collectible”.)

You can sum Odyssey up as a geo-blocked PokemonGo that sends you on escapades to nearby Starbucks locations.

Besides sending you to one destination (Starbucks), it also differs from PokemonGo by having a peer-to-peer marketplace where you can purchase “limited-edition stamps”. These NFT-stamp things give you points based on rarity, which in turn likely determines the price of the NFT. If you buy enough stamps, you can pay-to-earn a (Zoom?) “virtual espresso martini-making class”.

If another Zoom meeting isn’t appealing to you, that's okay. You can always buy more points to access unique merchandise and artist collaborations as well as get invited to events at Starbucks Reserve Roasteries or a trip to Starbucks' Hacienda Alsacia coffee farm in Costa Rica.

Pay-to-Earn has always been a winning model for rewards programs. But this push to make it an immersive experience aligns the Odyssey more with games. And pay-to-win games fail eventually.

This reminds me of an infamous South Park episode on freemium games, aptly titled “Freemium isn’t Free” (“the mium is Latin for not really!”). The episode laments how the “Candian Devil” tossed aside all nuance to temptation by creating boring games that become slightly less boring when you pay.

You can go to Starbucks, buy a cup of coffee, and then complete your quiz or whatever to get an NFT and some dopamine. Or you can skip the line and drop an even bigger bag on an NFT for some no strings attached dopamine - that likely comes with cooler animations and probably opens you up to a more aggressive push notification schedule.

But besides being the next evolution freemium, no part of this project needs “Web3” anything. The press page loves to jump on the “ownership” boat and say you “claim an ownership stake” in your loyalty to Starbucks, but do you really?

The report curiously says that no crypto wallet or cryptocurrency is required. The stamps are backed by Polygon, so you will definitively know that it's a unique jpeg. But the argument that you own an NFT is that you can put it on a flash drive and take it off the web completely if you want.

Stamps are digitally scarce, but if you don’t have the mobility with them, do you really own them? Or is Starbucks leveraging the fact that it is technically scarce to make you think you own it, when in reality they could delete the program and all of your earned and bought stamps with it?

Now, as you would expect, Starbucks is sure to avoid the word “invest” when talking about these stamps. But they are also oh-so quick to tell you there is a peer-to-peer marketplace.

NFTs have shed 97% of their value since peaking in January. Stamps aren’t investments, but NFTs are to some people. So I worry about how Starbucks will protect people from speculation.

Socios - which offers fan tokens - limits daily withdrawals and deposits to $250. They try to make it about the experience you get from owning the Fan Token, rather than the money you make from HODLing it.

Despite that, fan tokens expose owners to volatility.

In an article titled “Are Fan Tokens Fan Tokens”, price movements following losses on the biggest stage (UEFA Champions League) have been shown to have a two-fold hit on price compared to wins in the same competition.

Fans take pride in having unwavering loyal support in the face of losses, so, seemingly, these are gamblers that would rather not make an all-or-nothing bet on the outcome of a game via DraftKings rather than actual fans. They could also be people that are sick of hopping state lines to place their bets since their state doesn’t yet allow online gambling, so they went a less-regulated route.

Either way, something built for fans became someone else’s playground. It's ok for Socios’s target audience, in reality, to be different from what they set out to capture.

But Starbucks isn’t a startup. Its effort to expand its customer base can’t leave its existing base behind. Nor should it allow speculators to price out actual loyal customers from the experiences that Starbucks wants loyal customers to enjoy.