How to Apply Leonardo DiCaprio’s Dating Technique to Stocks 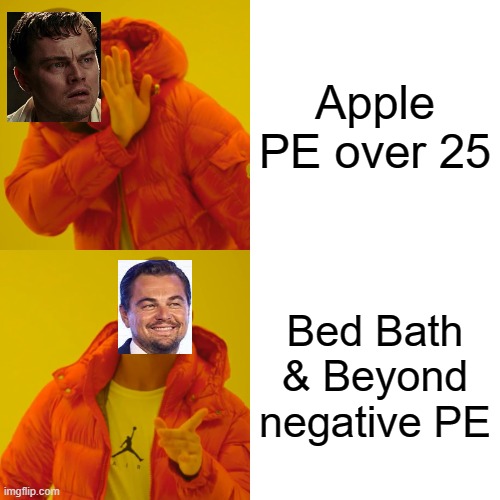 Just like Leonardo DiCaprio's taste in women, value investors don’t like seeing their most important number go over 25. Maybe investors got a good thing going and feel like they got in at the right time, but the second that asset’s price-to-earnings (PE) ratio reaches 25, it’s time to trade in for a different model with a lower number.

Now there are a number of important factors to consider when making an investment decision but the true DiCaprio way is to just focus on just one number and have a hard rule. That rule being an investment must have a PE ratio below 25. So, time to throw away any emotional attachment to your favorite stocks and trade in for the better-value asset.

Big blue chip stocks are the fundamental basis for a large portion of people’s portfolios as they can offer solid growth and lower risk as market leaders in their respective industries.

Apple (AAPL) and Microsoft (MSFT) have been some big winners over recent years for many investors, but the value play just isn’t there anymore. To be fair, these tech giants are sitting just above the 25 PE cutoff with a price-to-earnings ratio around 28 for each. Luckily, there are still some technology leaders that even Leonardo would approve of, including none other than Alphabet (GOOG) and Meta Platforms (META). However, it should be noted that Meta is down more than 50% in just the past year as it has lost its growth stock designation with the social media company struggling to find new avenues for growth in recent years.

Some investors might not be thinking so long-term with their investments and are just looking for quick gains and don’t mind a little volatility.

Investors looking for a little earnings play might keep an eye on Netflix (NFLX) as its earnings reports tend to lead to some large swings in price. Although take note that it's not actually the earnings or revenue that matters much for sentiment on this streamer, but rather just the gain or loss of subscribers and any outlook it gives for future subscriber growth.

Elsewhere, Starbucks (SBUX) remains king of the morning coffee (as in 70% sugar, 20% milk, and 10% coffee) and breakfast runs before work or a drive to the beach. However, the stock has taken a beating over the past year and is down 27%, resulting in a stronger valuation and could be a solid choice for a value buy as investors move back to the stock when the economy is in better shape.

The biggest problem with Netflix and Starbucks stocks are their PE ratios of 24 and 22 respectively, meaning that they don’t have much wiggle room before a DiCaprio dump.

Not Worth the Hassle

Finally, some investments might have the right number but still aren’t worth it even if they technically have good value.

Good PE ratios can sometimes come from massive corporations that have struggled and been unable to sustain growth, leading to investors moving off the stock for alternatives. The share price might drop then but earnings might be holding steady for the moment, resulting in a strong PE ratio but perhaps a far less sexy PEG ratio.

Wells Fargo (WFC) and Intel (INTC) are two leading examples of companies that used to be on top but have fallen out of love with investors in recent years due to underperformance and lack of growth. Wells Fargo in particular has had some serious struggles but has at least attempted to shift directions recently. Meanwhile, Intel is making some strides now but is still not where it used to be in years past as competitors such as AMD and Nvidia have stepped up their game while Apple and Google are making their own processors for hardware. All in all, the two firms still aren’t quite worth the hassle even with a strong PE ratio that might actually be a more bearish signal than anything.