How to Avoid the Universal Laws of Stupidity While Investing 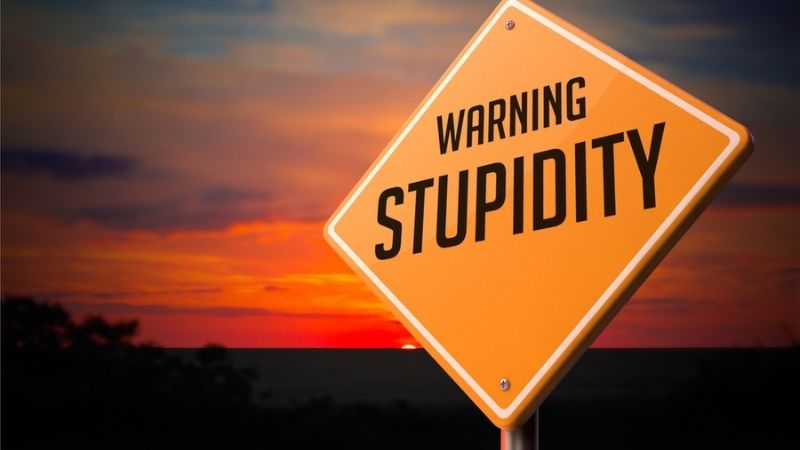 The Late Carlo M. Cipolla, a former professor of economic history at the University of California, Berkeley left us with the laws defining what he dubbed as the greatest existential threat to humanity: stupidity.

Professor Cipolla outlined the five basic laws of human stupidity where he identified shared traits held by stupid people. While the Professor said there is no defense against stupidity, investors can protect their portfolios from the actions of stupid people by understanding the laws by which stupid people are bound.

So now that we know the laws which govern stupid people and their decisions, how can we protect ourselves from their mistakes?

For starters, let’s start with the first two laws, particularly the second. Oftentimes persons in power are assumed to be very smart individuals, but - according to Professor Cipolla - this assumption can be a grave one. In the stock market, we have tons of so-called gurus, and under the assumption that the first law is correct, there are more stupid "gurus" than you might expect.

Investors tend to aim for "beating the market," but this mindset can lead investors to take unnecessary risks. This oftentimes leads them to hold a stock for too short of a period - or worse yet, buy into a peak because they think a stock will continue to soar.

Instead, investors can protect themselves by aiming (at times) to lose less than the market. This isn't to say don't maximize returns, but with the mindset of beating a set in stone number (the S&P 500's annual returns), you can get trapped into thinking that this next trade must be huge to make up for any performance gap. It seems like a silly way to put it, but for us retail investors, our biggest advantage is liquidity, not our market moving, lump-sum investments. Unlike the hedgies, when we exit a position, nobody knows. So this is all to say, don’t enter risky short-term investments without an exit strategy, don’t be too proud to let an investment go, and don't let others' performance make you think you need more risk.

This brings us to the Golden Law of Stupidity, Law number 3. It feels like such a no-brainer and like it has absolutely no place in the markets, but unfortunately, the market is filled with people who will dig their heels in on an investment and just let it bleed their (and your) portfolio dry.

This can be a hedge fund manager, the Chief Investment Officer at your favorite ETF company, and even your friend that swears by this stock that - lets be honest - was just a lucky trade that is probably not going to soar again for a while.

In this law, the professor identifies three other groups of people: Intelligent people who make benefits for themselves and others, bandits who advance themselves at others expense, and helpless people who always help others while stymieing themselves. If you want to protect your portfolio from stupidity, you will need to properly identify which type of trader they are.

Since trading is not the same thing as regular life, this does not mean that your acquaintance with the hot stock tips is stupid, a bandit, or helpless, but it might mean that you should have some head nods and "uh uhs" queued up for the next time ya'll talk, and be ready to jump ship if they mention a stock you are holding.

Laws four and five of stupidity really comes down to memory. People change, yes, and so can their decisions and perhaps so can their classification of stupid, helpless, bandit, and intelligent.

But with each successive step in any particular direction, it takes an extra step to get back. So just because an intelligent person suggests a loser, that doesn’t revoke their credibility. But for the stupid people who continuously get it wrong, don’t be swayed into thinking "they’ve got it now" after a good trade or two. Remember, even a broken clock is right twice a day.

Helpless people tend to be too trusting and are oftentimes taken for a ride by stupid people. Trusting analyst actions and company guidance too much can turn you into a helpless investor. But ignoring them all-together can be just as costly.

If you find yourself struggling to say no to bullish upgrades or your friend the salesman that always gets you in at the peak, it’s likely a sign that you need to do more due diligence on your own and drown out the noise. These should act, at the very least, as a speed bump to keep you from blindly jumping into an investment.

A simple PE ratio check can be a great first stop on the way to identifying if you are getting in at the overvalued peak, or if it may still have room to climb. Taking this a step further by using the PEG ratio can allow you to define the "Growth" aspect of the ratio with a timeframe that is suitable for your investing timeframe. Additionally, a Discounted Cash Flow valuation can help you come up with your own price target, rather than relying on someone else’s. If your friend is day trading and you are a value investor, these can help you see if it fits your time horizon as well.

In addition to using traditional valuation methods, investors can use InvestorsObserver’s proprietary scoring system to help them get in even better touch with the stock and the market as a whole. InvestorsObserver ranks the company against all companies in both short and long timeframes, as well as analyst rating, the company's financial well-being, and its long-term valuation.