The Pros and Cons of NFTs: New Form of Art or Death of the Artist? 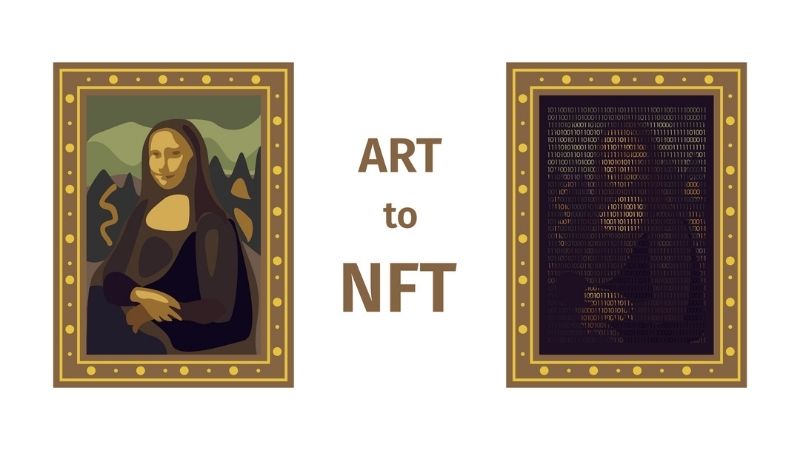 Non-fungible tokens (NFTs) are quickly becoming the new most-hated trend in cryptocurrency, but not before being adopted by nearly every industry that can find a way to try to cash in on the craze.

NFTs are a unique piece of data stored on a blockchain that typically come in the form of digital files (in most cases links to files) such as videos or images. Essentially, it is a way to make digital art. What makes this form of digital art different though is that it can be produced in limited exclusive quantities by using blockchain to create scarcity. Most digital files can be copied infinitely. So instead of downloading a video or image from the internet, NFT owners own essentially the original copy of that piece of art.

Now NFTs are quickly laughed at by most people because the individuals paying obscene prices for exclusive NFTs aren’t getting anything that everyone else can’t just make a copy of. So, someone that pays $10,000 for an NFT video of Tom Brady throwing a touchdown to Rob Gronkowski owns the original video but anyone can download or view that video for free.

Why ever buy an NFT then? Well, why would anyone ever buy a piece of artwork?

If NFTs are Digital Art, Then They Should be Treated as Art

The Mona Lisa is currently believed to be worth roughly $850 million but anyone that wants it displayed in their house can buy a very copy for $50 or less. Sure the copy may not use quite the same materials and have the same level of craftsmanship as the original but that’s not what is making the $849,999,950 difference. The reason that piece of art is valued that high is because of its history and that’s simply what others are willing to pay for it, or believe others will pay.

Obviously comparing some digital image created by a computer programmer to the Mona Lisa seems absurd but the point is NFTs need to be treated like art when thinking about investments. Some of the richest people in the world trade and invest in art pieces as they can soar in value quickly if investors know which pieces of work to purchase. However, it's a very different form of investing than stocks or bonds as there isn’t necessarily any inherent value.

There is no discounted cash flow analysis to be done on a painting and sculptures don't have PEG ratios. Art is far more subjective and its value is determined by what others perceive the quality to be. Additionally, millions of people invest in the stock market while high art is traded by only the wealthiest individuals.

Thus, when people are deciding on whether to invest in NFTs, they should treat it the same way as buying an art piece, or collectable whiskey, or even sneaker resellers. There are plenty of budget versions of each product, but the real money made by investors is at the very high end with the most valuable and rare pieces. There’s not much money to be made of buying and selling Jack Daniels or Nike Air Monarchs.

Is Anyone Implementing NFTs in Unique Ways?

Seemingly every day some new company decides to create their own NFT in order to make a quick buck. NFTs are all the rage right now and implementing them is an easy way to generate headlines and get the attention of the crypto world. The problem is, it's usually nothing more than some low-effort digital image tied to the company and sold at obscene price to capitalize on the current popularity of NFTs.

Nike (NKE) for example recently acquired RTFKT Studios with a plan to mint digital sneakers for avatars in the metaverse. The studio previously sold virtual sneakers that it paired with real ones to generate $3.1 million in a matter of minutes. Meanwhile, Macallan recently sold a whisky NFT cask for $2.3 million, with the actual cask attached to it holding roughly 600 bottles of 30-year-old whisky. The buyer retains actual ownership of the cask and receives a digital asset of a scan of the artist’s oil painting in addition to an animated component. Other distillers such as Hennessy have also entered into the NFT space, selling digital collectables tied to rare casks.

These examples might seem ridiculous at first as distillers and clothing producers enter the crypto world but are actually some of the best uses yet. Nike’s foray into crypto at least offers some value for people in the metaverse going forward as a clothing company producing digital clothes for people’s digital lives is pretty reasonable. Additionally, this is already a heavily used concept in video games where gamers purchase skins for their characters in some of the world’s most popular games.

Alternatively, Macallan and Hennessey are essentially treating NFTs as a mark of ownership instead of really selling the digital art as a piece by itself. Given that one of the strongest benefits of blockchain technology is security and transparency, this is a seemingly great way to verify ownership of a product. The owner of the NFT is a trusted source for ownership of the underlying product that anyone can quickly determine if the NFT is the original and trace ownership.

Additionally, collectible liquors are already sold like this very often with wealthy investors buying select casks from distilleries. Investors then simply have the casks age on site as they appreciate until finally selling when a whisky reaches its peak. The NFT portion simply gives owners something to technically have and show off for owning a cask while also being a secure way of proving ownership of the real cask at the distillery. A more interesting feature is whether certain NFTs can be sold separately from whatever ownership it provides. Perhaps, an investor wants to purchase the cask but sell the digital art that comes with it, however, it is yet to really be seen whether this is something that will be done. If it happens, we'll find out if the digital assets are really worth anything.

As previously mentioned, the gaming industry is very familiar with the idea of selling exclusive digital art. This is basically what customized in-game avatars are. However, that implementation has been less than supported by gamers as many publishers use predatory practices to entice gamers to buy each new skin that hits the store. Some are sold in limited quantities or in limited-time intervals to leverage players' FOMO. This practice has resulted in many gamers selling whole accounts on eBay that have exclusive skins attached to them that cannot be purchased in-game anymore.

The whole microtransaction implementation into video games has soured gamers on the industry and some developers' use of NFTs has only exacerbated the issue. Recently an upcoming game titled STALKER 2 came under fire as the developers announced an auction for an NFT that would allow the winner to have his or her likeness to be in the game as a character skin. The plan backfired immediately as gamers criticized the move as another cash grab that took attention away from game development and immersion into the game. The developers quickly canceled the auction due to the uproar but it sparked a much larger discussion on NFTs in games and digital content.

The NFT wasn’t bringing anything unique to the game besides the owner of the NFT's image and would allow for people to buy and sell in-game items, turning a piece of art into some kind of digital market exchange. The problem with this and many other implementations of NFTs is that it takes away from the actual product released by companies and turns the focus of the game from relaxation into some kind of weird investing.

Many industries have already experienced this with Nike having many of its shoes going to resellers that buy in bulk in order to sell at a premium on eBay or StockX. Macallan has its new bottles released only for collectors to snatch them up and hold them as investments with no intention of ever drinking them. Even video games have experienced this before NFTs with the new consoles from Sony and Microsoft being sold after market for a premium due to supply-chain disruptions.

The companies manufacturing the product aren’t bothered by this, in fact it only helps generate hype for their products. The real objective for companies is how to maximize profits from people buying and selling their products. NFTs can quickly take the profits being made on platforms like eBay or StockX and give that back to the company that created the piece. Now, instead of gamers selling accounts on eBay, they could just sell the digital content on whatever blockchain platform is created by a game developer.

As always though, the real loser is the consumer. At least, the people who simply want to relax and play a video game, or purchase a set of shoes to actually wear (crazy ideas here), or actually open a bottle with friends. As more and more industries are attacked by resellers, hobbies and pieces of art are nearly ruined by the motivation for profit in any place possible. As much as NFTs are art, the very thing they may destroy is the artist's expression behind them.