Proof of Work and Proof of Stake: What Are the Two Main Cryptocurrency Mining Models? 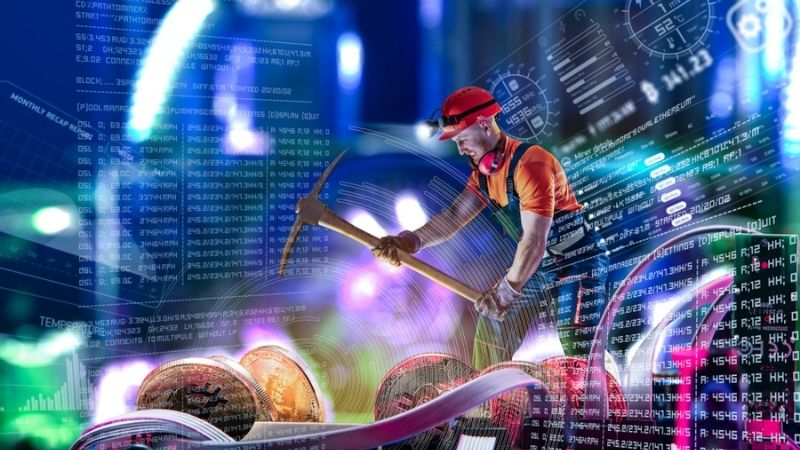 In the metaverse that is the blockchain, there is a massive learning curve when it comes to understanding the terminology and basic building blocks.

The language spoken on the blockchain is so different from that of Wall Street and retail stock investors and can be difficult to understand.

This is because blockchain is basically just extremely complicated computer code and the value proposition is the parameters of that particular code. Some blockchain projects try to decentralize finance and or even money itself. Others try to help artists continue to earn money from their work through NFTs. The list of potential uses for the technology is seemingly endless, even if many of these projects remain small or largely speculative.

But let’s ignore some of those side projects and focus on some of the original projects, mineable coins that serve as a medium of exchange.

When investing in the likes of Bitcoin or Ethereum, you aren’t investing in a startup that is popular but not profitable - on the theory that the likes of Palantir (PLTR) or Uber (UBER) will figure out how to monetize the business - but rather that the service provided by the code will have enough utility to consumers that the offer of new coins is enticing enough that people will invest, either in mining machines, or the crypto itself.

To understand what that actually means, you have to understand the difference between the classic Proof of Work model popularized by Bitcoin and the newer, more scalable Proof of Stake model that is being adopted for the Ethereum 2.0 update.

The Proof of Work (PoW) model is the most widely used and longest-standing method of validation for blockchain applications.

Under the PoW model, an extremely difficult mathematical equation is released to the miners, who race amongst themselves to solve the equation the fastest. The equation is actually so difficult, that it is more efficient for the miner’s computers to guess random answers than to attempt to solve it. And, the longer it takes to be solved, the longer the transaction takes to complete.

After the answer is arrived at, the node (the individual computer owned by the miner) verifies the answer with every other node on the blockchain. After 51% of the computers verify that the answer is correct, a block (transaction) is added to the blockchain (ledger) and the miner gets compensated in new Bitcoins (or other mineable PoW cryptocurrencies) for their troubles.

This verification step is where cryptos like Bitcoin derive their security, as someone would have to control 51% of the mining capacity in order to validate false transactions. This makes Bitcoin hackable on paper but makes it a very difficult in practice.

The PoW model, while it does great for security, is actually terrible for the environment as it incentivizes more and more power use. The more computing power held by a miner, the more they make. So the environmental impact worsens every year as larger warehouses are built, filled, and powered.

Further, this allows companies to benefit from economies of scale and push smaller mining operations out of the space as they grow at a faster rate and continue to take up a bigger share of the market with every transaction.

As this happens, the approval of transactions goes from a very decentralized process to a highly centralized one as large mining companies continue to be incentivized to pool their resources together to get a better hash rate. Basically, that just means companies combining their mining resources to increase the number of mathematical guesses their equipment can spit out per second. This helps them continue to out-earn other miners and can be used to estimate how many Bitcoins they will be able to mine with their current equipment.

So with PoW appearing to limit scalability while the incentive to mine decreases over time, weakening the security of that blockchain through centralization, Proof of Stake (PoS) models have been proposed as an environmentally and digitally safe alternative to PoW models.

Under the PoS models, investors in that coin “stake” their crypto in order to be offered the chance to approve transactions and earn the rewards of staking. Staking makes it so that only people who are financially committed to the continued success of that coin have the possibility of earning the crypto rewards from staking. And, if they are caught approving false transactions, then they can lose the coins they had staked.

But wait, doesn’t this make it just as susceptible to centralization if you can basically just buy the rights to approve transactions?

Well, in theory, that shouldn’t happen.

First, you'd have to buy up to 51% of the coins on that blockchain.

Second, the factors involved in choosing the next person to verify transactions are only semi-random. Time held and the amount held are both considered and play into your chances of being chosen to receive a “staking reward”, which is also known as a minting reward, interest, or as crypto dividends. Plus, since the coins staked are seizable if caught approving fraudulent charges, stakers with a lot invested aren't incentivized to start approving fake transactions.

Stakers can pass their coins on to trusted entities as well, in order to pool their coins together. When this happens, the pool of stakers validate as a team and split the crypto dividend based on their proportion of the stake. So if I have 90 IOcoins in the pool, and two others both have 45 IOcoins in the pool, then I will take 50% of our collective minting rewards and they will both collect 25% of the rewards.

No math, hash rates, or computer equipment is required. Just a digital vault where you send some of your coins to earn some money on the side.