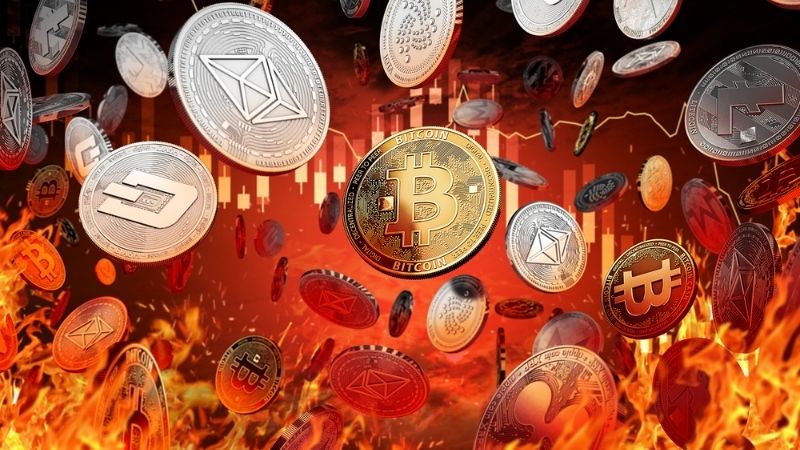 It's no secret that crypto markets have struggled since the turn of the New Year, with the flagship crypto Bitcoin running out of the gate to its worst form since the early days.

Bitcoin rallied hard during 2021, starting the year around $30,000 before topping out just shy of $69,000. While this was much less hardcore of a rally than many other crypto’s, the OG crypto felt all the love the market had to offer.

But 2022 is coming at cryptos with a vengeance. And while ‘make fewer risky bets’ may have been a worthy New Year’s resolution for the risk-enthused retail investors of 2021, it’s unlikely that healthy-habit changes have much to do with the recent slump.

Cryptocurrency began with the inception of Bitcoin, which marketed itself as both digital money and as a digital alternative to gold. In the old days, this was a Hail Mary, and given returns, we’d say it got caught.

Fast forward to the present day and the narrative shifts. Bitcoin is no longer quite the Hail Mary that it was back when Bitcoin’s use-case was still being “proved” by illicit underground marketplaces like The Silk Road. Essentially, this was, just where people first went to use the seemingly anonymous alternative to the USD for online transactions, and it caught on so we know people use it when it makes sense.

While real-life usability still remains to be proven at scale for cryptos as a whole, investments in some of the larger cryptos have evolved from an investment in the concept of digital gold and money into an investment in a risky asset. That's the evolution you would want to see if you are a crypto bull, but it also means that the rules are changing.

Being that it is more commonly treated as a risk asset now, it runs with mainstream sentiment and the economic cycle more than it did before. When interest rates are low, investors begin to speculate and make more and more speculative investments with cheap money. This oftentimes means that the riskier growth stocks thrive during these periods.

But as the economic cycles start to turn, which is where we find ourselves now, tech and high-flying biotech stocks struggle as investors reposition with the expectation that borrowing will be more expensive and returns will be available in less-speculative investments. With Bitcoin and other cryptos becoming mainstream, a lot of recent trading activity has started to resemble the classic risk-on/risk-off patterns that we see with stocks.

Thus, with less appetite for risk, buying is mostly coming from the “we believe in the technology” crowd while the FOMO crowd sits out.

Crypto enthusiasts can rest assured knowing that, according to CoinShares, 25% of the total trading turnover during the last four weeks, was related to crypto investment products. That institutional money, having not fled yet, is a big positive for the longer-term outlook of things, but it may be a little while until the space is as attractive as its 2021-self.

Another driving factor in the rotation out of cryptos is a lack of (good/compelling) news since the Facebook metaverse push, which sent a lot of cryptos soaring.

There have been a lot of NFT pushes as of late, as companies try to squeeze every dollar possible out of consumers as they jump into the latest craze. Nike (NKE), Taco Bell (YUM), and GameStop (GME) to name a few.

There has also been a bit of bickering and drama.

Oh, and who could forget about fraud. From a Squid Game rug pull to a $2.6 billion dollar grab at Turkish crypto exchange Thodex, right on over to a $58 million Doge-themed steal, fraud has been rampant. Oh, and here is the latest FTC crypto scam alert btw.

According to Chainanalysis, 2021 had record crypto-related crime, reaching a total of $14 billion stolen in total, compared to $7.8 billion in the previous year. Encouragingly, crime-related activity was at an all-time low in terms of its share of all crypto activity, but not-so-encouraging, the average lifespan of a financial scam fell to just 70 days from 192 in 2020.

Does crime becoming a smaller portion of all crypto activity outweigh crime getting more efficient? I’m not so sure.

News and Elon Musk’s tweets have had a great impact on crypto trading. So when that starts lacking or looking overly repetitive, crypto markets can take a hit.

The final price driver that we want to look at is an ancillary bit that exacerbates the problem.

Recent price declines have been far from kind to those invested in cryptos, but the movements have been extra damning to the over 109,000 traders that were hit with forced liquidations. Recent days saw a record $343 million worth of liquidations over a 24-hour period.

Forced liquidations happen when a trader is unable to meet the margin requirements, ie, has insufficient funds to keep the leveraged position open. Investors can track forced selling on Coinglass.

Basically, you can think of this as the reverse to the short squeeze retail investors famously pulled on GameStop stock last year. But instead of forced buying from out of the money calls (which helped push the stock higher), it’s forced selling from the futures market, which has the opposite effect.

Now, of course, analysts and investors are at-large attributing the dip to the December FOMC meeting, which showed a more hawkish Fed as many people believe the cryptos have benefitted from the ultra-loose monetary policy. While that certainly threw a wrench in crypto markets, it may have been more the final straw to break the extended-year-long rally rather than having acted as a singular catalyst.