Building Your Stock Portfolio Like a Fantasy Football Team 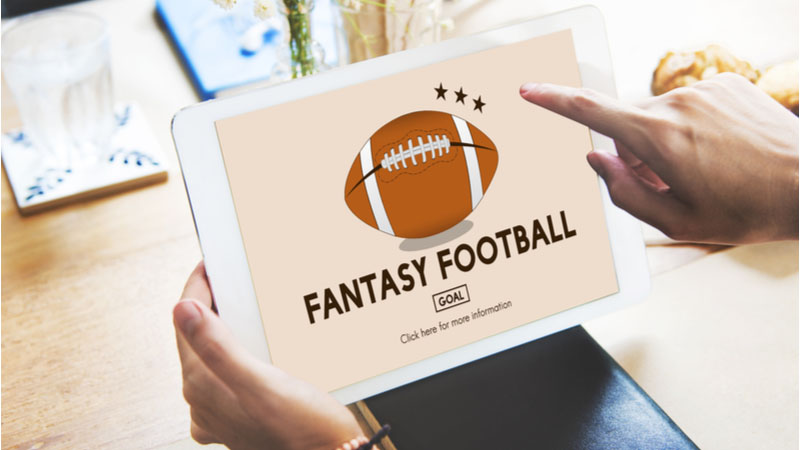 Football season is back again.

More importantly, fantasy football is also back, allowing fans to take a break from playing Monday-morning quarterback and actually manage their own team.

The process of managing a fantasy team is pretty simple, starting with a draft to pick the best players and then choosing which athletes you should put in the "game" either from your bench or the waiver wire. Managers make these decisions based on matchups, injuries and a host of other factors.

The process of building a portfolio and managing it long term might seem completely unrelated but there are some strategies from fantasy that can be adopted to your finances.

Grabbing a quarterback to start is not usually the best move even though that position often scores the most points. There's a much bigger gap between the top running backs and those in the middle of the pack. Meanwhile, index-tracking exchange traded funds (ETFs) aren’t the sexiest of picks as they probably won't be the biggest winners in a portfolio but they can provide consistent returns with very little risk of blowing up your portfolio.

So, if building a portfolio is similar to drafting a fantasy team, then what order should you draft your investments?

As previously mentioned, ETFs are an easy and strong start to building a portfolio. They offer diversification benefits as they track an index such as the S&P 500 so that returns will be nearly equivalent to the broader market. This way, investors can get exposure to 500 individual stocks without having to buy all of them individually. This sort of broad diversification helps protect you from unsystematic risk.

There are plenty of other picks that may provide larger returns, but the possibility of large returns carries a lot of risk. Correctly picking stock that outperform the market on a consistent basis is extremely difficult. Guaranteeing the markets rate of return with a single fund can limits the potential for massive returns in a short period but offers a lot of stability and the best chance for long term growth. While this kind of "passive investing" can lead to starting Saquon Barkley for all of last season in fantasy.

While first-round picks are often pretty widely agreed on, this is where personal preference, style and analysis start to play a bigger role. Wide receivers are putting up huge numbers in the modern, pass-happy NFL and big tech giants such as Microsoft (MSFT) or Apple (AAPL) are thriving in an economy dominated by new technology. Blue chip stocks such as these are a mainstay on many portfolios for good reason as they are some of the largest and most dominant companies in the world today.

Grabbing some of the best wide receivers early in a draft is huge as the league moves away from the running game and turns to downfield connections such as Mahomes and Tyreek Hill or Brady and Mike Evans. Similarly, investing in large tech firms (even slightly smaller firms that provide the hardware for these services such as AMD or Nvidia) is hugely important as the economy becomes even more technologically focused. The coronavirus pandemic seems to have only accelerated this transition as now many businesses are having employees work from home on their computers and using all kinds of software to maintain efficient communication.

Knowing which wide receivers to pick can be tough. Is the quarterback healthy? Does he play in a division with a lot of good defenses? Is there a new coach who plans to commit to the running game?

This is where some tools and outside analysis can help a fantasy manager, or investor, make decisions.

Is Apple's recent dip after a split decision from a lawsuit and a seemingly underwhelming iPhone launch the start of a long-term trend, or an attractive buying opportunity? These are kinds of decisions a portfolio manager needs to make.

Finally, it's time to grab a complement to those high picks. This is when investors want to double up on bullish sectors or industries, maybe a receiver on the same team as your quarterback. If the tech sector is already taken care of, then something like Amazon (AMZN) is the way to go here. Amazon isn’t just the largest online retailer but also has its own streaming service and Amazon Web Services (AWS) is the future of the company it seems. Or your the wide receiver is a hardware provider like chipmaker AMD, then complete the connection with the required software such as Alphabet (GOOG) since no one asks a friend to Bing it. Even a large financial institution such as Berkshire Hathaway (BRK.B) can be the way to go as the entire economy is reliant on these firms just as entire offenses rely on the quarterback (and the offensive line).

At this point the meat of the team is pretty much filled out but the tight end spot is still open. Currently, the lines between a TE and WR have blurred a bit with many being set out wide while some teams still use them in a more traditional sense. Thus, this is where investors can bulk up on more modern day tight ends and fill out with some newer tech stocks such as Shopify (SHOP) or even Tesla (TSLA) since it's more of a tech company than carmaker anyway. Otherwise, more old mainstays can still receive some large gains and are still the backbone of the economy with the likes of BP (BP) and Exxon (XOM) remaining nearly as vital as ever.

Defense hopefully gives a fantasy team a consistent 10 points each week and may pop once in a while but is really a place where consistency and stability are desired. Additionally, it's the other side of the football and is looking to prevent losses more than score to win. Consumer defensive stocks are the obvious comparison here with particular focus on utilities and consumer staples. Walmart (WMT) and Duke Energy (DUK) are some good picks for stocks that are likely to be less affected by economic downturns.

Meanwhile, when grabbing a kicker in the last round, the move a lot of the time is to grab someone on an average or inefficient red zone offense that plays in a dome with easy kicking conditions. There’s really not much to go on here so just grab an Atlanta or New Orleans-based stock or pick up Manchester United (MANU) for the fun of it.

Oftentimes a fantasy league is won, or lost, on the waiver wire by managers who unearth unsung players who end up putting up big points. Successful management in investing, and portfolios, is often about finding a few outperformers to go with a strong, consistent base.

Tools like InvestorsObserver's stock screener, sector and industry analysis tools and scoring system can help investors build a portfolio and evaluate potential new additions, while the portfolio tracker can help investors keep tabs on which investments are high scorers and which are duds.